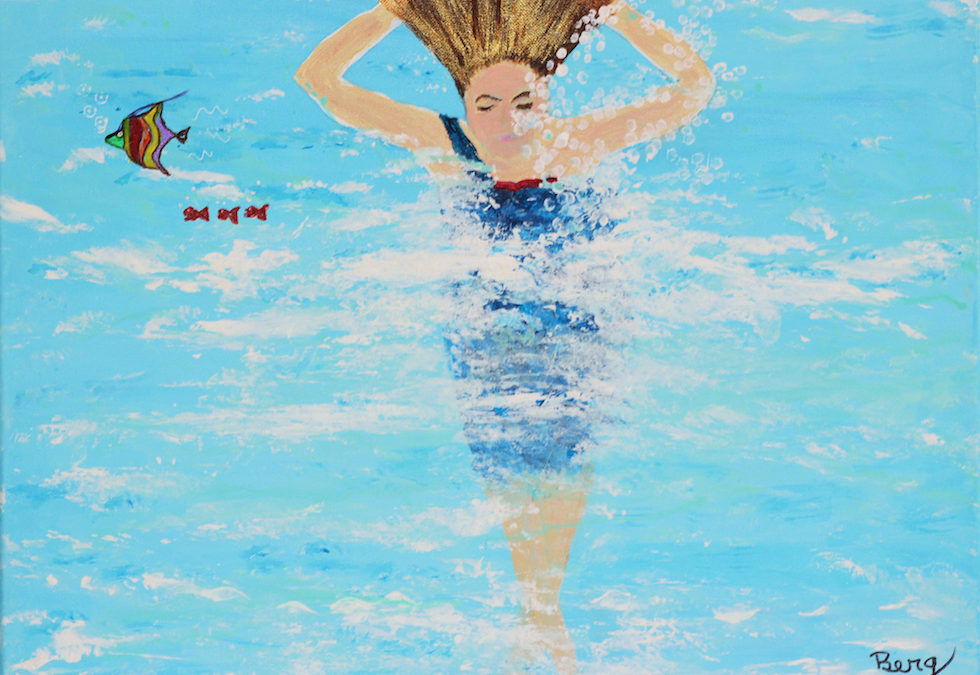 A cumulus cloud wandered overhead as Angela floated on her back in the ocean. She was numb to the water temperature as she watched the cloud slowly moving by, studying its heavenly form—its snowy-white wings and flowing robe. Angela often thought about her sister while she was at the beach. Anna had been gone almost twenty years already—Angela’s very own beach angel that drifted over the many shades of blue.

She tried to ignore the shadows in the water, long tendrils of hair flowing among seaweed, her pregnant mother letting go of the child’s hand . . . one endless wail by the shore, watch­ing Anna’s red pail moving back and forth with the waves.

Angela had been the nine-month heavy weight . . . it was her fault her mother was unable to dig her heels into the sand that day and dive into the murky sea. From within the womb, she heard her mother’s cry for help and came into the world that very day curious about life and death.

She wanted to know the sea because it was what heard Anna’s last prayers and whispers, the last to caress her innocent body, her last breath, before taking her, grabbing her by the knees and pulling her away forever. Angela floated farther out into the water and breathed heavy with anticipation, reminding herself she shouldn’t be swimming alone—mother’s strictest rule, you know, because of the accident. That’s how her mom referred to her sister Anna’s drowning whenever it was talked about, which was rarely. But it was obvious she blamed herself every minute of every wak­ing hour.

This wasn’t the first time Angela had disobeyed. It was as if the beach beckoned her; it was her church, where she knew there was God. She squeezed her lids tight as oyster shells and the hazel in her eyes became sightless pearls within. If dark images came before her as she dipped below the water’s sur­face, she’d think of how the ocean was filled with life, from ameba to whale.

Moving with each cresting wave, Angela looked at Sea Horse tied to the same petrified piece of driftwood she always used when she went horseback riding. Her sandals, cutoffs, and T-shirt were left in a heap at the stallion’s hooves. She’d have to dry off before she returned to the barns where she worked. She’d put her wet two-piece daisy print bathing suit in the horse’s pouch and let the wind dry her hair on the jaunt back.

She concentrated very hard, not to lose track of her count­ing. She had to break her record. The beach was almost empty now, an unseasonably warm afternoon in the month of May. There was no one nearby to witness her while she tested her gutsy skill, her unflagging game of courage, swimming out past the breakers. When she tired, she allowed her body to move up and down with the upward heave of each swell, becoming part of the rhythm.

Since she was little, she had obsessed about being under the water, always trying to hold herself down as long as pos­sible and then allowing the water to bring her up at its will. To her, the sea was alive with deceiving beauty and pleasure; it was to be respected and understood. The chilly water forced her to tread, to swim, to dive its surge, with its froth spilling over her, teasing her—there for her to master, to conquer.

Ninety fi-i-ive . . . she counted the seconds in slow sequence, holding her breath, as she had practiced, unconsciously, so many times. Ninety Si-i-i-x. A smile crossed over her closed lips. She was coming close to surpassing her last goal, close to reaching 100. But in an instant her undertaking turned to utter terror.

A creature gripped her head, clutching her hair, dragging her, pulling her with great force in one direction. There was no way to stop whatever it was. Some of her hair was being stripped from its roots. Maybe I’m stuck? A fisherman’s trap?

It occurred to her that she had lost count of holding her breath, that she would die now at the age of nineteen, without ever having reached her objective, her glory. The notion of los­ing her battle to the water was heartbreaking more than any­thing else. It was personal between the two of them.

She swallowed, choked, the salt stinging her throat, her eyes popping open, the burning pain, seeing nothing. So, this is it. Oh, what irony. This is my nightmare. This feeling—pulling down—the confusion, slipping, twisting pain, loss of sense, heavi­ness, and then the feeling of freedom seconds after your trachea closes. Eyes blinking one last time, unable to see, to scream, you merely succumb.

When in her mind, she saw Anna’s limp body floating face down, something in Angela snapped, and she fought back. She wouldn’t let the ocean swallow her, too. She wouldn’t let her mother go through that kind of pain again. At birth, her mother counted her limbs and each of her fingers and toes. She kicked her legs in scissor movement and then bit her attacker’s claw and sang out from the water—the cry of a sea lion.

There was her monster, face to face—a human’s, not a monster’s, with the bluest eyes—sky color, bringing her back into self. They stumbled back to shore as one . . . mangled limbs splaying in whatever direction the rough current took them.