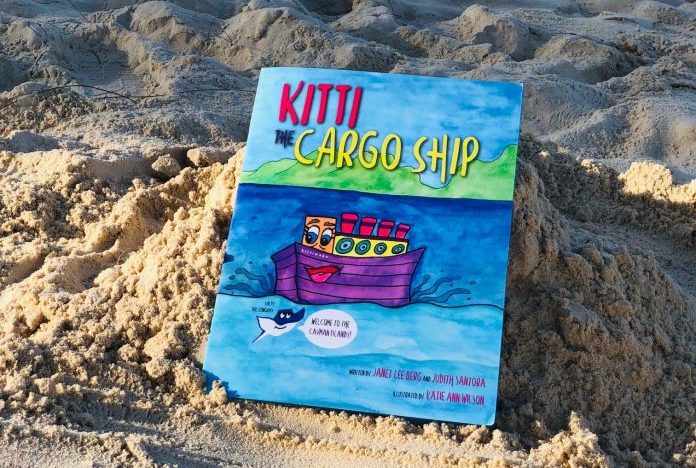 The tales of the Kittiwake have been reimagined in a children’s book, ‘Kitti the Cargo Ship’, written by sisters Janet Berg and Judith Santora and published by Caribbean Creations.

The sisters, who are part-time residents of Cayman, were motivated to write a story using the Kittiwake as inspiration after overhearing a young child lamenting its demise and sinking.

“The little boy expressed great sympathy for the ship, which was to be dragged to the bottom of the sea,” explained Santora. “It was easy for him to feel how frightened and lonely it would be on the bottom of a dark sea.

“We realised that there was an important story to be told.”

Berg describes the result as a ‘fantasy children’s story’.

The tale does make reference to the Kittiwake’s real-life past as a World War II rescue ship, and the authors use poetic licence to fill the gap between its decommission and sinking with a fictional life of transporting fruit and vegetables from South America to the Caribbean as a cargo ship. This is a delightful addition as it allows younger children to point out and name the colourful fruit that Kitti carries.

What follows is an enchanting story of Kitti’s journey from cargo ship to popular dive site at the bottom of the sea, and her feelings along the way.

“The story demonstrates how life can evolve as Kitti becomes the centre of a colourful and joyous new life, starting with one small yellow fish and eventually growing love all around her, as well as meeting people from all across the world,” said Berg. “It is a story of life’s adventure and how change can seem dismal at first but turn joyful in the end.”

The fantasy tale is brought to life with vivid images by Katie Ann Wilson.

While this is avid reader and history buff Santora’s first foray into writing, Berg has previous experience. She holds a master’s degree in creative writing and literature and worked as a journalist before moving on to plays and novels. Her work includes ‘Rembrandt’s Shadow’ and ‘Restitution’ – historical fictions loosely based on the true-life events of her family during the Holocaust. Kitti is, however, her debut into the children’s literature genre.