A novel recounting how Hitler targeted the Dutch Katz brothers, prominent art dealers in Europe who could only keep their families alive by trading canvasses for their lives, takes on a close connection to Massapequa. The book, “Restitution,” is a sequel to author Janet Lee Berg’s first novel, “Rembrandt’s Shadow.” And Berg, who grew up in Massapequa, uses her fond memories and makes reference to her h o m e t ow n as she weaves a compelling story t h r o u g h o u t the book. She uses the nickname of Massapequa, MatzohPizza, and m e n t i o n s the beautiful beaches and water that her family boated and surfed on in the 1960s. “ T h e y had a Sophie’s kind of choice to make and only 25 of the 90 m e m b e r s of their e x t e n d e d f a m i l y made it out alive,” said Berg, who researched the history of the Katz family extensively. “My husband’s sister, who is now 83, was only 5 and a half years old at the time of their escape on Oct. 20, 1942, and recalls the German shepherds and armed soldiers when escorted to the train station,” she said. 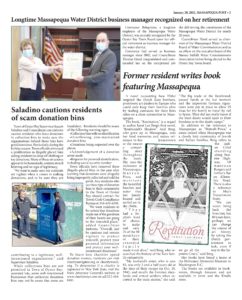 “The big trade of the Rembrandt passed hands at the last moment and the important German signatures were put in place to allow 25 visas for the family to travel by rail to Spain. They did not really know if the train doors would open to their freedom or to the death camps.” In addition to the reference to Massapequa as “Matzoh-Pizza,” a name coined when Massapequa was a closely knit community of Jewish and Italian families, Berg refers to the Indian Chief s t a n d i n g along Sunrise Highway, All A m e r i c a n Burgers and Arthur’s Bar on Alhambra Road. There is also a reference to May’s Department Store. “We can never bring back the lives lost, but 80 years later, perhaps we can change the course of art history by taking the Dutch government to task, even if we go all the way to the Supreme Court,” said Berg. Her books have found a home at the Holocaust Memorial Museum in Washington D.C. The books are available in bookstores, through Amazon and are available in print and the Kindle store.