The Hamptons RE Showcase: When people talk about being a lifesaver, they usually mean it figuratively. 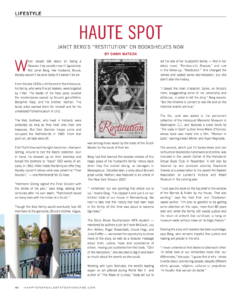 From the late 1930s until the end of the Holocaust, his family, who were fine art dealers, were targeted by Hitler. The leader of the Nazi party coveted the masterpieces owned by Bruce’s grandfather, Benjamin Katz, and his brother, Nathan. The failed artist wanted them for himself and for his unrealized Führermuseum in Linz.

The Katz brothers, who lived in Holland, were protected as long as they held onto their rare treasures. But then German troops came and occupied the Netherlands in 1940. From that point on, all bets were off.

First The Führer sent his right-hand man, Hermann Göring, around to loot the Katz’s collection. Gun in hand, he showed up on their doorstep and forced the brothers to “trade” 500 works of art. Later, in 1942, Hitler made the family an offer they, literally, couldn’t refuse: what was called the “Final Solution,” — one Rembrandt for 25 lives.

Though the Katz family would eventually lose 65 members to the genocide, Bruce’s mother, Vogue, was among those saved by the trade of the Dutch Master for the souls of their kin.

Berg had first learned the broader strokes of this tragic piece of her husband’s family history back when they first started dating, as teenagers in Massapequa. Decades later, a story about Bruce’s great uncle, Nathan, was featured in an article in The New York Times in 2007.

“I remember our son pointing that article out to us,” recalls Berg. “He clipped it and put it on our kitchen table at our house in Remsenburg. We had no idea that this history that had been kept in the family all this time was about to become big news.”

The Stony Brook Southampton MFA student — mentored by authors such as Frank McCourt, Lou Ann Walker, Roger Rosenblatt, Ursula Hegi, and Jules Feiffer — welcomed the opportunity to share more of the story, as well as a broader message about truth, justice, hope and acceptance of others. Having just published her first book, “Glitz of the Hamptons,” she decided to dig in and learn as much about the events as she could.

Working with Lynn Nicholas, the world’s leading expert on art pilfered during World War II  and author of “The Rape of Europa,” Berg set out to tell the tale of her husband’s family — first in her debut novel, “Rembrandt’s Shadow,” and now in the follow-up, “Restitution.” She changed the names and added some dramatization, but she didn’t alter the history.

“I based the main character, Sylvie, on Bruce’s mom, exaggerating some of her personality and attributes, in order to tell the story,” Berg reports. “But the timeline is correct to real life and all the historical events are true.”

The first book was added to the permanent collection of the Holocaust Memorial Museum in Washington D.C. and features a cover blurb by “The Lady in Gold” author Anne-Marie O’Connor, whose book was made into a film, “Woman in Gold,” starring Helen Mirren and Ryan Reynolds.

The second, which just hit bookshelves and can be found at bookstores nationwide and online, was included in the Jewish Center of the Hamptons’ Virtual Book Club in November. It will be the featured by arts advocate attorney Stephanie Drawdy at a presentation to the Jewish Art Dealers Association at London’s Victoria and Albert Museum in the coming year.

“I just saw the book on the top shelf in the window of the Barnes & Noble by my house. That was exciting,” says the East End- and Charleston-based author. “I’m also so grateful to be getting some attention on this topic, more than 80 years later and while the family still awaits justice and the return of artwork that continues to hang on museum walls without notes on its tragic history.”

Sharing the story with readers has been a privilege, says Berg, who remains hopeful that justice and healing will prevail in the end.

“I never understood that desire to label each other. I’d rather look at our similarities more than our differences,” she says. “I guess that is why I chose to write about connecting people, despite different ethnic groups, religions, cultures or prejudices. I’m hopeful that we can do better.”