“I learned to write and read in French first, and the object of French, I suspect, is to be as indirect as possible, while the object of English is quite the opposite.”

The tiny blonde author, also known as Professor Kaylie Jones, glides lightly into her Creative Writing classroom at Stony Brook University at Southampton. Natalie, the teacher’s pet, a fluffy white shih-tsu, shadows her delicate movements. Jones repeats words of advice to practice reading good books: “You cannot just sit down and write a great novel. I just reread some early Hemingway stories and realized how sophisticated they are! I never understood them before, not in their innuendoes, not in their depths.”

The dog looks intently at her master, Professor Jones, turning her head as she lectures. The students in a way do the same. They’re mesmerized, eager to learn about writing from someone whose mind and sense of humor are of excess size, and who derived so much from her father before her, novelist James Jones, best known for From Here To Eternity and A Thin Red Line.

“My father was raised poor, and joined the pre-WWII Army out of desperation. I have always felt more comfortable with people who haven’t had it easy, despite the fact that financially, at least, I had a pretty easy childhood. I think I must have a sign on my forehead that says Veteran’s Daughter, because they spot me a mile away. I have a number of very close friends who are Vietnam Veterans, writers whose lives and work were influenced by my dad. I think they’re looking to adopt me, and I’m still looking for a dad, so we’re a good fit.”

Like her role model, Kaylie earned distinctions, writing several novels, including: As Soon As It Rains (1986); Quite The Other Way Around (1989); A Soldiers Daughter Never Cries (1990), her autobiography made into a movie, directed by James Ivory, starring Kris Kristofferson and Barbara Hershey; Celeste (2000); and her latest novel, Speak Now (2003), and screenplays, including the award-winner Anor of Aquitain, co-written with her husband, Kevin Heisler.

My husband and I are reading more of the same books lately, so we can discuss them, something we used to do more of, before we were parents. Our daughter, Eyrna, is an eight-year-old math whiz, thank God. That means she is well-adjusted. Writing is a lonely profession.
Jones is currently working on a memoir about her mother who recently passed away, a subject that is seemingly painful for her to talk about. She describes her husband and herself as homebodies, xenophobes who live in a shotgun New York City apartment. “We’ll be emptying my mother’s house in Sagaponack soon; I have no family left in the Hamptons of my childhood; it’s gone away like the vistas of endless fields that my father loved so, a thing of the past. I’m also working on a humorous novel now, but I feel anything but funny lately.”

Having been born and raised in Paris until 1974, Kaylie goes back as often as possible. My parents settled there, the old stomping ground of my father’s literary heroes. I have a wonderful French publisher and several very close friends still there, but having lost one of my oldest friends in May, Paris seems slightly emptier to me. I have one brother, Jamie, who lives in Washington D.C. with his family, and who is probably the best thing in my life besides my husband and daughter . . . we’re very good together as a family.

When the subject switches to her daughter, Jones beams. “After a terrible, long labor and some complications, she describes waiting all night for the nurses to bring her baby girl to her. I could hear the wheels squeaking on the little plastic nursery cubicles they rolled the babies around in, passing my door. Finally, when the sky was beginning to lighten, they brought her in to me, and I nursed her while the sunlight, totally red, poured into the room. I decided to make a vow to her and to God, not to impose my vanity and my ego upon her, and to let her be whoever she was going to be. It was a hard vow to make, and an even harder one to keep! ”

Jones shared her feelings on what has changed about writing for her over the past 20 years. “It has become much easier to stare at a blank page and not panic, feel that page fright. Im not pressured to finish a book right now; I think my daughter needs me more than the literary world does at this time . . . but, I’ll always be writing.”

Jones says she imagines visiting her daughter at college in ten years from now: The little cabana in Placencia, Belize is going to have to wait . . . She recalls her own childhood, growing up in Paris, and learning Russian, her third language at the age of eight, the age of her own daughter. “They start children learning second and third languages very young in Europe, which is one of their strengths; I think that is one of the things missing in our education here. I recently met an important French minister at a function involving the Alliance Francaise, and I told him my feelings about French education: The teachers are far too mean and condescending. He answered: ‘But theyre preparing the children for the hard knocks of adulthood.’ I said. No, theyre preparing the French to be mean, which is their reputation worldwide. At first when I started to express myself through writing, I found it extremely difficult. I think this is because English is my second written language. I learned to write and read in French first, and the object of French, I suspect, is to be as indirect as possible, while the object of English is quite the opposite.”

“I wanted to be an actor when I was a teenager before my father died, but realized I didn’t have the strength of character it would take.” Kaylie Jones went to Wesleyan University for her undergraduate studies and Columbia University School of the Arts where she received her MFA in Writing. She thinks that it is tougher than ever to get noticed by big publishers today, and cheers her students to write fabulous books. “I think the battle for literary fiction is slowly or quickly being lost, but Im prepared to fight to the end!”

“The first time I really believed I wanted to write was when I was reading War and Peace. Tolstoy had been obsessed with death and dying and wrote a great deal on the subject. That was when I had the first truly spiritual revelation of my life . . . and felt Tolstoy was speaking directly to me in my rage and agony over my Dad’s recent death. I felt this great relief wash over me and I thought, My God, this man who died almost a hundred years ago can make me feel this way, then all people can find hope and salvation through the written word.” 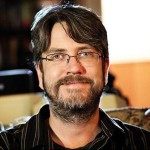 John Collins has worked in web and social media for almost 20 years. He resides in Olathe, KS and looks to Lawrence for the future.

View all posts by jcollins →